Festus High School Counselor Jennifer Kline traveled to Washington, D.C. during th last week of January to be recognized as one of four finalists to become the 2020 National School Counselor of the Year.  Kline received the honor during a gala held at Washington's Union Station.   During her week in Washington, Kline met with Missouri 2nd District Congresswoman Ann Wagner and both of Missouri's Senators, Roy Blunt and Josh Hawley.  She also had the opportunity to meet with staff at the Department of Education and participate in a congressional briefing where she and her fellow Counselor of the Year finalists appeared on a panel discussion to talk about public education and some of the issues school counselors are facing across the country.

The American School Counselor Association which presents the School Counselor of the Year Award says "the award honors exemplary school counseling professionals who devote their careers to serving as advocates for the nation's students, helping them achieve success in school and in life.

In a special meeting this week, the Festus R-VI School Board of Education unanimously approved A.J. Ofodile, Jr. as the ninth Head Football Coach at Festus High School.  Ofodile spent the last four seasons on Coach Barry Odom’s football staff at the University of Missouri.  Prior to that, he spent 15 years at Rock Bridge High School in Columbia, Missouri, with 13 of those years as head football coach.   “I’m very excited to be joining the Festus family,” Ofodile said.  “During the entire time of the interview process I was blown away by the excellence displayed by the District, from top to bottom.  It is rare to find that kind of commitment.”

Ofodile spent six seasons in the NFL, initially drafted by the Buffalo Bills, and his final three with the Baltimore Ravens.  After his playing career concluded, he coached on Barry Odom’s staff at Rock Bridge High School in Columbia.  He became head coach after Odom departed for the college ranks.  During his 13 seasons as head coach at Rock Bridge, Ofodile was named District Coach of the Year three times (2006; 2010; 2013), his teams won four District championships, and in 2013 Rock Bridge advanced to the Class 6 Show-Me Bowl State Championship Game.  During his tenure at Rock Bridge, he coached more than 45 D-1 signees.

“We are pleased to welcome Coach Ofodile to Festus,” said Superintendent Dr. Link Luttrell.  “Being able to attract the attention of a high caliber coach such as Coach Ofodile is an indication of how outside individuals view not only our football program but also our outstanding excellence displayed across the K-12 spectrum. I’m hoping all of our students, parents, and patrons will welcome him and his wife into our school community”

In addition to his head coaching duties, Coach Ofodile will teach strength and conditioning classes at the high school along with coordinating the strength and conditioning program so it meets the needs of all students.  Athletic Director Eric Allen is excited to welcome Coach Ofodile to Festus, “To get such a quality coach with his drive to make young men better and his vast knowledge of the game is a win for our student-athletes.  He will be an asset to the Festus School District.”

A formal introduction to student athletes and parents will be scheduled in the very near future.

Upcoming Registrations for the 2020-2021 School Year

Save the date and mark your calendars, we have some important dates coming up that you'll need to remember for next school year.

More information about these important dates will be posted when the details are finalized. 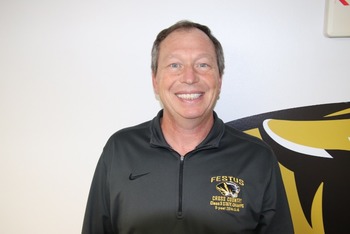 Coach Bryant Wright To Be Inducted Into MTCCCA Hall of Fame

Festus High School Cross Country Head Coach Bryant Wright will be inducted into the Missouri Track and Cross Country Coaches Association Hall of Fame. Wright, who has been head coach at Festus for 18 years, has lead the boy's teams to 7 state championship, including the last five in a row, and the girls to two state championships.  He says he is gratified to be inducted, “It’s overwhelming to realize that you are being recognized for what you’ve done, not just by someone, but by your peers. To be a part of an elite group is humbling.”

Festus Athletic Director Eric Allen credit’s Coach Wright with always being there for his runners, “Coach Wright is one of the most dedicated coaches to his athletes I have ever been around. He is committed to always getting better no matter how many championships he has won. He is an outstanding human being and this is very well deserved. “

Before assuming the head coaching position, Coach Wright served as an assistant coach on the team. He says he shares this recognition with all of his teams, “It means I got to work with some great coaches and athletes. It makes it more gratifying when I think of all of the people who have been there with me, not just the athletes, but my family and friends, and the support they have given me.”

Coach Wright will be inducted into the MTCCCA Hall of Fame at the Associations annual clinic in Columbia, MO on Friday night, December 13, 2019.